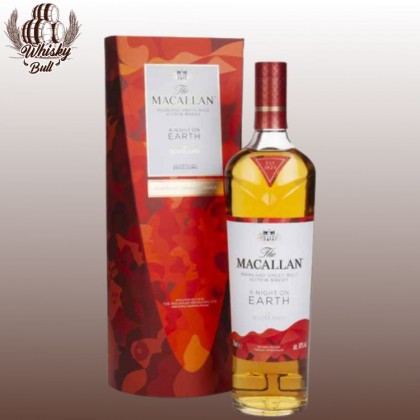 The first in a series of annual releases from The Macallan, the wonderfully titled A Night on Earth in Scotland is inspired by Hogmanay, Scotland's New Year's Eve celebration. Created by Macallan lead whisky maker Sarah Burgess, whose memories of Hogmanay were a key influence to the expression, this single malt features whiskies aged in American and European oak sherry seasoned casks, as well as ex-bourbon barrels.

Those ex-bourbon barrels have imparted a distinctive helping of vanilla notes to the whisky, an homage to the 'first footer', a custom of Hogmanay where it's supposed to be good luck for a dark-haired person to be the first to visit your home after midnight on New Year. Apparently, the 'first footer' will be carrying shortbread (that's where the vanilla notes we were talking about come into this), whisky, and coal for the fire.

A Night on Earth in Scotland features designs by Japanese-French illustrator Erica Dorn, once again inspired by the New Year celebrations around the world.