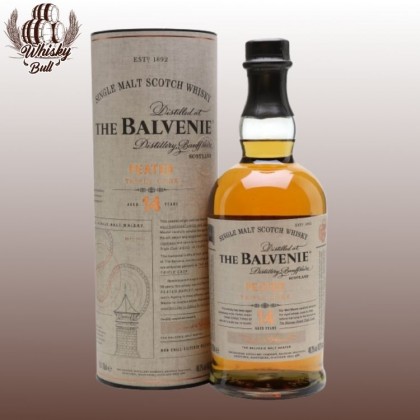 Balvenie 14 Year Old Peated Triple Cask is a whisky with a bit of a backstory! In the 1950s, Balvenie distilled a batch of heavily peated malt, unlike other Speyside distilleries at the time. In the early 2000s the distillery started experimenting to recreate that same peated malt and since then, they have dedicated one week each year, aptly-named Peat Week, to using only peated barley in its production.

This peated expression was originally released for the Travel Retail market. It was aged for 14 years in three cask types – first-fill bourbon, refill bourbon and sherry cask. The resulting whisky is sweet, smoky and full of spices.

Nose: Sweet, malty aromas with a gentle earthy smokiness in the background. Vanilla fudge and cinnamon.