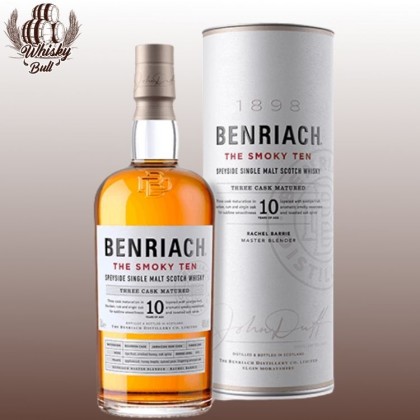 Benriach The Smoky Ten, Benriach broke convention in Speyside by returning to distilling batches of whisky in the old, 19th century style, using malted barley smoked with Highland peat. This wood rich Highland peat imparts distinctly sweet and smoky notes into Benriach peated whiskies. Benriach The Smoky Ten has been crafted from a combination of unpeated and peated spirit and three cask matured for at least ten years in a combination of bourbon barrels, Jamaican rum casks and toasted virgin oak. The whisky is then expertly married together to create sublimely smooth layers of sunripe fruit, aromatic smoke and toasted oak spice, lingering into the perfectly balanced sweet and smoky finish.